The ALTA Emerging Translator Mentorship Program is designed to facilitate and establish a close working relationship between an experienced translator and an emerging translator on a project selected by the emerging translator. The mentorship duration is nine months. The emerging translator is expected to choose a project that can be completed in this timeframe, and they will only be advised on that particular project. Congratulations to this year’s Russian prose mentee, Samuel Page, who will be mentored by Marian Schwartz: 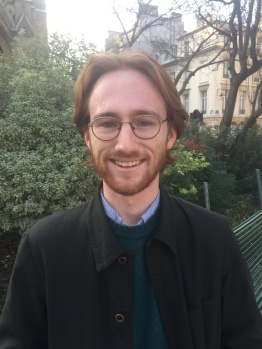 Samuel Page was born and raised in Los Angeles, California. He first became interested in Russian literature at Occidental College, where he was fortunate enough to have been assigned Pevear and Volokhonsky’s translations of Gogol’s short stories. As part of the larger Comparative Literature department, he focused on Russian, Latin, and ancient Greek, languages and literatures that require a newcomer to set aside their habitual modes of expression, both grammatical and personal. Sunny Los Angeles can feel very distant from stormy Saint Petersburg, and he was impressed by the ability of a good translation to render the writings of a diminutive Ukrainian man from the 1830s as both pleasantly familiar and compellingly foreign.

For his B.A., Samuel completed a senior thesis project on Isaac Babel’s two major short story cycles, Odessa Tales and Red Cavalry. The project focused on the cyclical composition of the collections, specifically the ways in which each cycle’s narrator figure works––often stealthily–– to unify the different stories into a whole, and how the page breaks between narratives function alongside the written text. The two works are not collections of disparate stories per se, but rather two total units, and represent Babel’s contribution to and development of the short story form at one of the most tumultuous times in Russian-language literature. For the project, Samuel translated numerous sections from the various stories, his first experience of sitting with a single author’s language for an extended period of time. He recognized and worked at the difficulties of replicating Babel’s economy of language and preserving ambiguities in his translations, as well as attending to words, phrasings, and imagery that appear across his oeuvre––his first real brush with the arduousness and potential beauty of literary translation.

Having completed his undergraduate education in 2019, Samuel is currently working as an English Teaching Assistant with the Fulbright program for the 2019-2020 academic year. He makes his temporary home in Yelabuga, a small town in eastern Tatarstan, where he works with (very talented) university students in English conversation and English-Russian translation. The experience has been an eye-opening one, exposing him to identities and ways of life that are typically glossed over in depictions of Russia, in particular in American discussions of the country. Looking forward, Samuel is thrilled to begin work with ALTA and Marian Schwartz, engaging closely with new voices within Russian literature, experiments with the short story form, and the art of translation.

This mentorship is being offered by ALTA in partnership with the Russian Federation Institute of Literary Translation.

This entry was posted in ALTA Mentorships, Features. Bookmark the permalink.