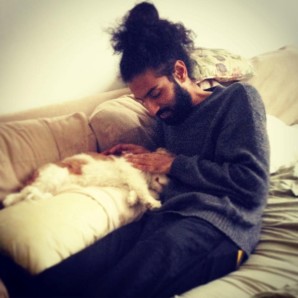 Being from Pakistan – a country where both English and Urdu are official languages, and where a host of regional languages are commonly spoken – Haider learned the importance of translation early in his life. His childhood memories include his grandmother reciting Punjabi verses from the popular romance, Heer Ranjha, his father telling stories of Amir Hamza in Urdu, and his uncle mesmerizing him with Grimms’ fairy tales, reading out loud from a colorfully illustrated English version. As a result, he never saw translation as a skill to be acquired, but rather as a reality to be lived every day.

When he left Pakistan at the age of sixteen to finish high school in Britain, his ability to translate became even more pertinent, allowing him to move across geographic boundaries in addition to linguistic ones. He continued to read in multiple languages, discovering Orwell at the same time as Manto, Toni Morrison along with Bano Qudsia. Literature became, for him, a way of living between languages, and with them, identities.

Later, he came to America to study at Yale University. Seeing the misinformed and irresponsible way in which Islam was often translated for an American audience, he found it increasingly necessary to pay attention to the ethical questions that informed the role of translation, not simply the aesthetic questions. He began to understand how the task of translation – the task, in other words, of negotiating difference – was central to the way cultures imagined gender, race, and nationality.

His general interest in the way societies and individuals engaged translation turned into a more concrete interest in literary translation, specifically the translation of Urdu prose and poetry into English, when he joined the MFA program at University of Nevada, Las Vegas. Guided by generous teachers and encouraged by a MFA program that prioritized translation, he focused on the work of contemporary Urdu writers who are often ignored unlike English-language writers from the region.

His first translated novel, Hassan’s State of Affairs by Mirza Athar Baig, will be published next year. The experimental novel follows a group of surrealist filmmakers in their effort to capture Pakistan. The opening chapter of the novel was published in Brooklyn Rail, and was nominated for a Pushcart Prize. Other translations have appeared in Portland Review, Aldus, and 3quarksdaily. His critical work has appeared in Los Angeles Review of Books, Jadaliyya, Himal SouthAsian, The Believer Logger, and Tanqeed. Starting in October, he will be the Charles Pick Fellow at University of East Anglia in Norwich, UK.