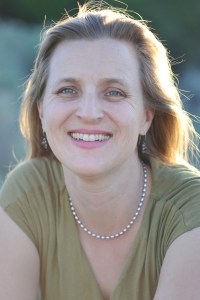 Monika Cassel was raised bilingual in English and German in upstate New York and Germany. She formed a deep interest to German culture, history and literature early on; she also became fascinated with learning languages, studying French and Italian at Princeton University. In college, Monika also fell in love with poetry and studied translation with the novelist Paul Auster, translating Paul Celan, but although she worked part-time as a freelance translator during the 1990s, her interests at the time (and her sense of career possibilities) centered more on literary criticism than on her translation practice.

After receiving a PhD in comparative literature at the University of Michigan with a dissertation on 19th century women poets and translators in England, Germany and America, Monika moved to Santa Fe, NM with her husband to teach at St. John’s College. The college’s practice of having faculty teach across the curriculum gave her the chance to deepen her reading and teach mathematics, history of science, music, French, and ancient Greek, often while learning alongside her students. However, Monika missed literature and poetry and left St. John’s in 2008 to try her hand at teaching high school English. She ended up falling in love with the excitement and challenges of teaching teens.

In 2010 Monika became a founding faculty member at New Mexico School for the Arts, a statewide public high school, designing the school’s English curriculum. A partnership with the Lannan Foundation’s outreach program, which brings visiting authors into local classrooms, led to a grant to support her development of a creative writing program at the school. Monika’s return to creative work came out of her teaching; inspired by the work of her students, she began carving out time to write. She re-entered translating after reading Durs Grünbein’s book-length poem, Porcelain: Poem on the Downfall of My City, a work that resonated strongly with her own questions about her family’s WWII history and demanded to be translated. Monika’s work as a translator and as a poet now inform each other as two sides of her creative practice. A desire to address the dearth of women in translation led her to two authors whose  work she loves to champion: Dana Ranga, a Romanian documentary filmmaker and poet who writes in German, and poet and novelist Daniela Danz, whose books Pontus and V both explore regional and national identity and history.

Over the past years Monika has published translations of poetry and prose from Durs Grünbein, Dana Ranga, and Daniela Danz in journals such as POETRY Magazine, Michigan Quarterly Review, Guernica, and Asymptote; she has translations forthcoming in Asymptote and the Harvard Review Online “Omniglots” feature. Her poetry chapbook, Grammar of Passage, which is inspired by her German family’s films, letters, and stories, won the 2015 Venture Poetry Award and is forthcoming from flipped eye publishing in the UK. Monika left New Mexico School for the Arts in 2016 to move to Portland, OR with her family and now teaches German online for Oregon State University.