Announcing the Winner of the 2019 National Translation Award in Prose: What’s Left of the Night

November 8, 2019—The American Literary Translators Association (ALTA) is pleased to announce the winner of the 2019 National Translation Award (NTA) in Prose! 2019 marks the twenty-first year for the NTA, and the fifth year to award separate prizes in poetry and prose. The NTA, which is administered by ALTA, is the only national award for translated fiction, poetry, and literary nonfiction that includes a rigorous examination of both the source text and its relation to the finished English work. This year’s judges for prose are Bonnie Huie, Charlotte Mandell, and Jeffrey Zuckerman.

This year’s winner was awarded at the ALTA’s 42nd annual conference, Sight and Sound, held this year at the Joseph A. Floreano Riverside Convention Center and the Hyatt Regency Rochester in Rochester, NY. As this year’s judges could not be in attendance, the award was presented by former NTA judge Jeremy Tiang. The winner will be awarded a $2,500 prize. 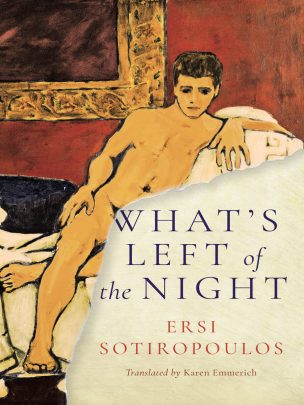 The judges had the following to say about this title:

C.P. Cavafy has been summed up as “a Greek gentleman in a straw hat, standing absolutely motionless at a slight angle to the universe.” Ersi Sotiropoulos’s What’s Left of the Night shakes off this cliché with sinuous sentences that describe a man in motion thoroughly enmeshed in the world. She takes us into three days and nights of Cavafy’s European tour in June 1897, as he stays in Paris with his brother and explores the city—and his still-unnamable passions. Moving seamlessly from description to thought to assessment of the poems he’s working on, the story allows us to live, briefly, in this history; in Karen Emmerich’s translation, the prose becomes as luxurious and welcoming as Cavafy’s own poetry.

Karen Emmerich is a translator of Greek poetry and prose. Her translation of Eleni

Vakalo’s Before Lyricism won the Best Translated Book Award for Poetry, and her co-translation with Edmund Keeley of Yiannis Ritsos’s Diaries of Exile won the PEN Poetry in Translation Award. She is also an Associate Professor of Comparative Literature at Princeton University.

The 2020 National Translation Award in Prose submissions portal will be opened in January 2020.

This entry was posted in ALTA Conference, Features, NTA, Prizes. Bookmark the permalink.