This month we move to New York City, where we find Cedilla & Co, one of the first, if not the first, in this new wave of literary translation collectives, which has certainly blazed a trail for the many others that have sprung up since. The collective comprises nine members covering eleven languages.

This week’s interview conducted by the Emerging Translators’ Collective. 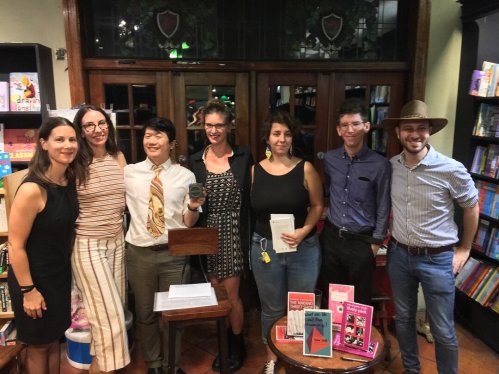 1) Let’s start with the basics. How did the collective form?
Julia Sanches (Portuguese, Spanish, Catalan & French):
The idea for Cedilla started with a conversation Sean Bye and Julia Sanches had one Saturday afternoon over coffee while both were translating the book projects they were contracted to do, outside their New York City office hours. They were lamenting the fact that they had day jobs at all, as well as the unpaid labor translators are often expected to do in order to get to what they actually want to do: translate. They thought: how nice would it be to have an agent? They wouldn’t have to pitch projects, negotiate rates, pore over contracts; they might be able to place stories in a wider variety of journals and magazines; hell, they could democratize literature in translation..! And then, drat: neither could afford to lose 15% of their fee. Eventually, it occurred to them they could put together a group of translators who’d function as agents for each other’s projects, an idea that riffed off a collective agency model for actors in the UK. Cedilla has since changed in ambition and scope, but that was the initial inspiration.

2) The translators of Çedilla & Co. are such an impressive bunch. Do some of you take on specific roles, or is it an all-hands-on-deck operation?
Alex Zucker (Czech): It is an impressive bunch. I am continually in awe of my fellow members’ knowledge and skills, and especially hard work. As for whether or not members have specific roles, I would say it varies from one situation to the next, though there are some things certain members clearly enjoy doing, so the others are happy to let them take the lead on those. When one of us has an idea, they bring it to the group, and if enough other members want to do it, we do it; if not, we don’t. We all have a lot on our plates at any given moment, so it’s understood that nobody is obligated to do anything they don’t have the capacity for. Some members are more gung ho about organizing events—and of course those of us who live in New York City also have more opportunities to do so. Others are expert at contracts, so we tend to lean on them more for advice in that arena. Certain members see to the website and newsletter, others are more active in reaching out to publishers, building relationships with editors, and so on.

3) I noticed you offer services to industry professionals. What does that aspect of the collective look like? Are you moving toward becoming an agency of sorts?
Allison Markin Powell (Japanese): A number of us provide reader reports, which is not so unusual, but we also offer what we call ‘market intelligence,’ which is basically information that each of us has acquired from our years of experience working within foreign publishing industries. In addition to offering our inside and up-to-the-moment take on what the literary landscapes look like in these countries, often their publishing worlds do not function in exactly the same way as they do in the U.S. or the U.K., so we can consult on these differences. In reverse, we can provide a foreign publisher or agency with in-depth research or reporting on, say, editors at English-language publishers who have acquired literary noir in translation. And while I don’t think we’re ready to hang out our shingle as an agency yet, we have been exploring new models for our relationships with both publishers and authors, as well as with agencies themselves.

4) Is there a general translation ethos among the members?
Jeffrey Zuckerman (French): There are nine of us, and we cover twelve languages, so I think it’s safe to say that we all have different vantage points when it comes to the word-by-word, page-by-page practice of translating. The ethos we do share is that we work not within a vacuum but within a larger network of English-language editors, foreign-language publishers, brilliant authors, shrewd publicists, and remarkable readers. In such a context, we see the greatest value in cultivating cooperation and collaboration among all parties in order to bring brilliant books to as wide a readership as possible—and every way in which we can support one another only helps to improve the end result for everyone involved.

5) How do you cultivate community among yourselves? And the wider publishing community?
Jeremy Tiang (Chinese): We meet once a month, taking turns to host, and while we usually have a lot of business to discuss — which we do as efficiently as possible — this is also an opportunity to catch up with each other, which is a crucial part of feeling like a community rather than a bunch of people on the same e-mail list. Often, there is cake. Those who aren’t able to be there will Skype in. Being New York based, we are able to attend many literary events in person, where we can meet fellow translators, editors, booksellers, and others in the industry. We also organize about three readings of our own each year, including one at the ALTA conference. While we do stay connected to those farther afield, there’s no substitute to gathering people in physical space.

6) At ALTA 2018, you mentioned that doing social media is a time sink. What other ways are you communicating with potential translators & readers?
Sean Gasper Bye (Polish): Plenty! We have a quarterly newsletter, composed by the fabulous Alta L. Price, showing projects newly sold, new publications, articles by or about us, upcoming and past events and so on. We hold a few readings a year to showcase new work. As you mentioned, we’ve also hosted panels at ALTA talking about our work and that of other collectives. We produce occasional catalogs of new and recent work to give out at book fairs and our events. Above all, each of us is constantly in touch with our own contacts one-on-one, talking about the work of the collective. I find we’ve successfully built up our profile in the community without the need to post constant updates across however many social media platforms.

7) What are some of the successes you’ve celebrated so far?
Alta L. Price (German & Italian): The answers above have addressed many of these, so—aside from the concrete victory of having placed projects from Arabic, Chinese, and Polish with U.S. and U.K. publishers—I’d say our less tangible triumphs are equally important, including readings and related public events heightening the visibility of our profession. Each of our quarterly newsletters has triggered queries, many of which have led to excerpts in magazines, so we’re succeeding in bringing new voices into English. We thrive on seeing our work get reviewed in major publications, hearing from editors in search of foreign voices, meeting readers during events we’ve organized at local bookstores, and sharing new authors we’ve discovered while abroad. The collective benefits from our individual wins as well: getting NEA and PEN Heim grants, being long- and shortlisted for (and sometimes winning) awards like PEN Translates, the BTBA, the TA First Translation Prize, etc. help us prove translation’s power. Staying in close contact as many of our members hop all over the globe for residencies, book fairs, and research work is another success, as it broadens our geographic and cultural reach while also bringing us together as living bridges connecting countries and cultures.

8) What does the future of translation look like?
Heather Cleary (Spanish): More and more translators are seeing the value in sharing ideas and resources, and are finding ways to do this formally (as collectives and through other kinds of professional groups) and informally (getting together locally to workshop and discuss projects). I think this will continue in years to come; hopefully these conversations will lead not only to more and better translations, but will also foster better working conditions and—as a result—make translation an option for a broader range of individuals, voices, and approaches. You thought I was going to say something about computers, didn’t you?

9) Being in New York, I imagine you’re often approached by potential members. How does one go about joining Çedilla & Co.?
Cedilla is the perfect size for us—more members would change the dynamics and complicate the logistics getting together for meetings or readings. Besides, every collective coheres around particular needs. We wanted our collective to have a wide range of languages, for example, even at the expense of being able to consult with each other on nuances of translating a particular language. Rather, we encourage translators to establish their own collectives by finding colleagues they’d love to spend more time working with, and by drawing on the aspects of each collective that work best for them to create something that perfectly fits their needs. And we’re more than happy to cheer others on!

This entry was posted in Collective Conversations, Features, Interviews. Bookmark the permalink.