The Lucien Stryk Asian Translation Prize recognizes the importance of Asian translation for international literature and promotes the translation of Asian works into English. Lucien Stryk was an internationally acclaimed translator of Japanese and Chinese Zen poetry, renowned Zen poet himself, and former professor of English at Northern Illinois University. This year, ALTA is excited to announce that the prize has been awarded to Eleanor Goodman for her stunning translation from Chinese into English. 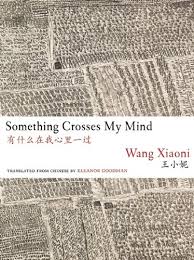 Something Crosses My Mind by Wang Xiaoni, translated from the Chinese by Eleanor Goodman (Zephyr Press, 2014).

“‘I rush down the stairs,/ pull open the door,/ dash about in the spring sunlight…’ So begins this exquisite collection of translations by Eleanor Goodman of poems composed over the past several decades by Wang Xiaoni. In what follows we are taken out into the streets and on cross-country trains, into villages, cities and markets; we peep out through the windows of the poet’s home and sense the nostalgia invoked by a simple potato. Here is a poetry of the everyday, written in delicate yet deceptively simple language, and translated beautifully into its like in this first collection of Wang’s work to appear in English. Something Crosses My Mind offers up the refreshing voice of a poet forging her own path, neither shunning the political nor dwelling in the lyrical but gently and resolutely exploring her world in her writing,” write the judges of the Lucien Stryk Asian Translation Prize, Lucas Klein, Janet Poole, and Stephen Snyder.

Nine Dragon Island, Eleanor Goodman’s first poetry collection and a finalist for the Drunken Boat First Book Prize, will be published this coming winter by Enclave Publishing House and distributed in the US by Zephyr Press. Her honors include a 2013-14 Fulbright Grant, which she spent doing research at Peking University. She has also received a Henry Luce Translation Fellowship from the Vermont Studio Center, a PEN/Heim Translation Grant, the 2013 Ninth Letter Translation Prize, the 2012 DJS Translation Award, two Ann Kao Foundation Translation Fellowships, and an International Merit Award in Poetry from the Atlanta Review. Her work has been the finalist for the Cliff Becker Book Award twice. She has held residencies at the American Academy in Rome and VSC, and she has given lectures and readings across China and the United States. She is currently a Research Associate at the Fairbank Center for Chinese Studies at Harvard University. Selected translations and poems can be found here.

This entry was posted in Uncategorized. Bookmark the permalink.